When the King of Thailand discussed the mobile phone i 1907 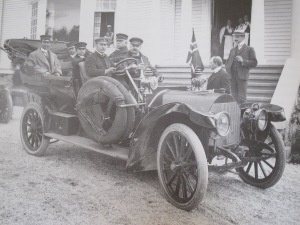 In the summer of 1907 the King of Thailand, King Chulalongkorn, travelled through Norway. In late July he stopped in Notodden, a small town in the east of Norway. There he discussed electricity and power supply with the norwegian inventor and tycoon Sam Eyde. Late one night in the end of July, they discussed the quite new invention, the telephone, and they agreed that the phone soon would be wireless, and in some years the mobile phone could be as small as a pocket watch. This amazing conversation took place about 80 years before the first pocket-sized mobile phone was invented.

The reason why we know this, is the famous letters from Thailand beloved king Chulalongkorn, the Rama 5, to his daughter, princesse Nibha Nobhadol, better known as Noi. These letters are brilliantly written, they are full of details and sharp, intelligent observations. In Thailand they are known under the name «Klai Baan», a long way from home. In Norway the letters from the norwegian part of the King’s journey were published in 1996.

In a letter to princess Noi, dated July 31, the King writes: «We arrived Notodden at half past seven in the

afternoon. We were very satisfied because the trip by motor car only took a couple of hours. When we arrived, it stopped raining.We had a look at the pictures taken in the rain the day before, and they were pretty good (the King was a very good photographer). During the dinner we talked about the miracle electricity really is. Mr. Birkeland (professor in physics, you can read more about him here.) is an expert in electricity. Once he was in Bangkok, in company with the greek princes Waldemar og George. His first idea was the electro magnetism. The next was to use electricity inside cannons instead of gun powder. His third idea was to make rain. And his fourth was to make artificial fertilizer together with the engineer Sam Eyde. Read more about him here.»

«The idea of artificial fertilizer was originally Eyde’s, and he got a patent for this method in all the countries in the world. His company, Hydro, is anxious about competition from strong rivals that could develop the company’s ideas into new ideas and inventions. Therefore the leading persons in the company make sure that the progress and development in the company are the best, and they spend a lot of money on research and development. Their recent methods indicates to send telegrams without cables. This system is very different from what we use today. The new method will use hydroelectricity power, but it is still only a plan. With this invention it is therefore quite logical that you could use this system to make a portable telephone with no cables, not bigger that a pocket watch. You could put it close to your ear and listen what the other part has to say. This is a new way of communication. But it is still not certain that you can talk in long distances, maybe only from this town to Kristiania ( the old name of Oslo), a distance of four hours with train. We talked about this and much more before we went to bed at about 23 in the evening.»

An amazing conversation. The next day the Kong sent boxes of artificial firtilizer to Bangkok.