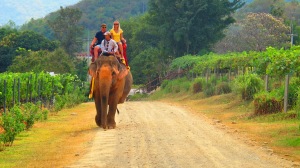 The wonderful Hua Hin vineyard which, against all odds, produce good thai wine

In my local store in Hua Hin I pay 350 baht (12 US Dollar) for a bottle of whisky or gin. In the same store a bottle of red wine, local or imported, you pay about 600 baht (20 US Dollar). But wine producers are optimistic about the thai wine market, and especially young thai people prefer wine to liquor. How is that possible?

I have never understood alcohol politics in Thailand. It’s obvious that some thai men, especially men, drink too much. You can see them sitting on the corner, drinking cheap thai whisky with ice and soda every night. Thai whisky is cheap, very cheap. But imported liquor is cheap, too. You can buy one bottle of expensive blended whisky, Chivas or Black Label, a local 7/11 for about 1000 baht. The price for a good bottle of wine is about the same.

This system is very kind to breweries and whisky producers, but wine producers risk up til 300 per cent extra taxes.

The reason for this is the tax system. This system is very kind to breweries and whisky producers, but wine producers risk up til 300 per cent extra taxes. I have never got a good and logical answer to the obvious question: Why this extreme tax burdens on wine (which in modest amounts is good for your health), and why almost no taxes on liquor? The reason, I’m afraid, has something to with lobbyists and powerful people in the alcohol business. For a long time wine was not a product of consumer’s interest i Thailand. But not any longer.

The Thai Wine Association (TWA) was formed in 2004 to promote quality wines made from locally grown grapes.  This association wants to create awareness and enhance the image of Thai wines, both in the domestic and international markets, and it wants to educate Thai people about Thai grape wines and the health benefits associated with moderate wine drinking. It also promotes wine tourism, and tries to increase government awareness and support of Thai grape wine industry. The Thai Wine Association includes 6 members who all produce quality grape wines in three main regions. Today they crush around 1,000 tons of grapes, producing around 800,000 bottles of wine per annum. Siam Winery with its wine tourism and education center in Hua Hin has become South East Asia’s leading wine company with a total of over 1000 employees.

About ten per cent of the thai population drink wine, but there is a strong developments in the level of consumer awareness and appreciation of wines. Wine consumption is increasing and still light red and white wines are often considered and positioned as beverages with superior health benefits. Wine is linked to fashionable lifestyles, particularly in urban areas, due to its high quality image. However, the price of the better Thai wines, which are viewed locally as competitive with imported wines, will be over $20 per bottle, which is almost the same range that the consumers can shop for good imported wines.

Wine drinkers in Thailand are between 25 – 55 years of age. In Thailand, red wine dominates and holds a 70 percent market share in the retail market. A significant number of wine drinkers in Thailand lack a thorough knowledge of wines, so low to medium-priced level wines (below US$40) retail hold the biggest market share of about 70 percent. Why do young thai people drink wine, despite the price? The price adds value to wine as a gift. Wine increases its attractivity by being expensive and therefore exclusive. An young thai people wants to live a healthy lifestile. They are, so to say, wiser than the wine tax-system in Thailand. 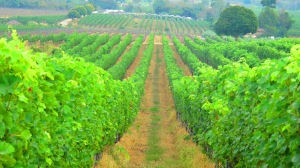